Team SAIN I is gathering all available information regarding current situation “Saini in OBC class.” We condemn this decision and we will fight back. We are seeking “true Saini” who willing to fight this legal battle to get our honor back. All interested individual can reach us at “Contact Us” on left this of this page. All/any kind of help will be appreciated.

The Life of Guru Nanak 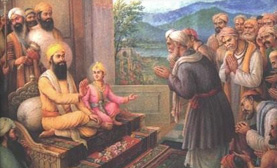 Maharaja Ranjit Singh was born on 13th November 1780 at Gujranwala in Punjab. His father Sardar Mahan Singh was a Chieftain and a Warrior.

SAINI'S are a kshatriya clan belonging to the CHANDRAVANSHI KSHATRIYA's, a branch of the warrior class. In a high court judgement in punjab.

Dippe 1) Saini and Mali are not same caste. 2) Jyoti Rao Phule was not a Saini 3) Muslim community which has common ancestry with Sainis are Khanzadas and Meos. Some live in India near Delhi and Nathura…some live in Pakistan. Arains have no link with Sainis as commonly believed. 3) Jats are numerical majority […]

This is just wrong, we shouldn’t let this happen. We (www.sainiinfo.com) against this. Anyone please Let us know how to stop this. Manjit Singh contact@sainiinfo.com BC status for Swarankars, Sainis in Punjab In poll mode, SAD-BJP govt to give 5-marla plots to homeless on common village land Posted at: Sep 11, 2016, 1:21 AM Last […]